After the invitations were designed I had to start thinking about the order of the party.  The first experience Harry had was going to Diagon Alley to shop for all of his supplies.  I wanted the girls to have a similar experience.

I started by decorating the lamppost with the appropriate signs.  I had done the same thing for the Wilderness Explorer party and I had kept the arrow signs (just in case) which worked out well because I didn't have to remake them.

I had one sign for Diagon Alley, Hogshead, Hogwarts and King's Cross Station. 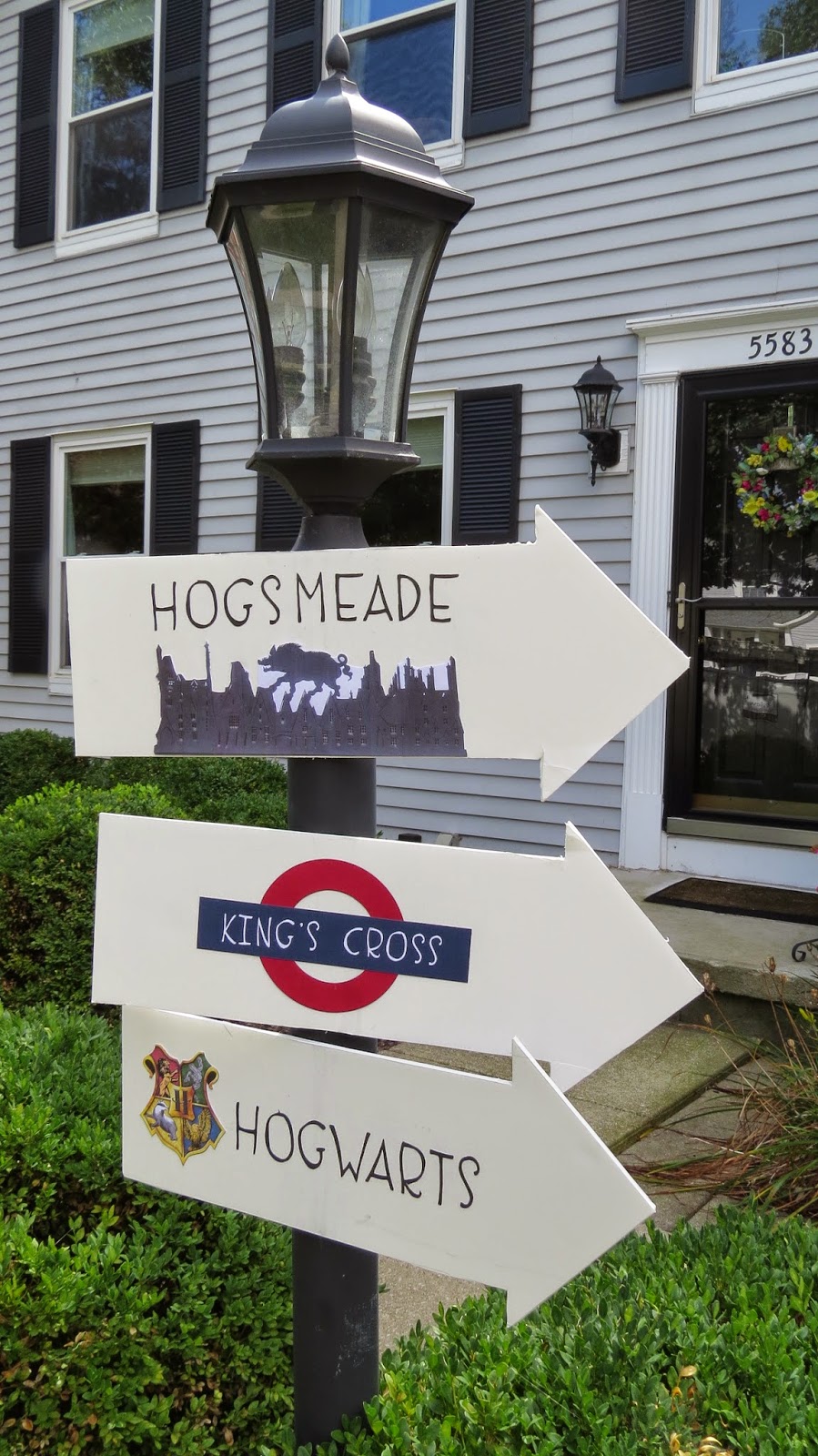 For the Hogmeade sign I used my Cricut to cut out the letters and printed out a photo of the Hogsmeade welcome sign at Universal Studios.  I also used my Cricut to make the King's Cross sign and the Hogwarts sign. 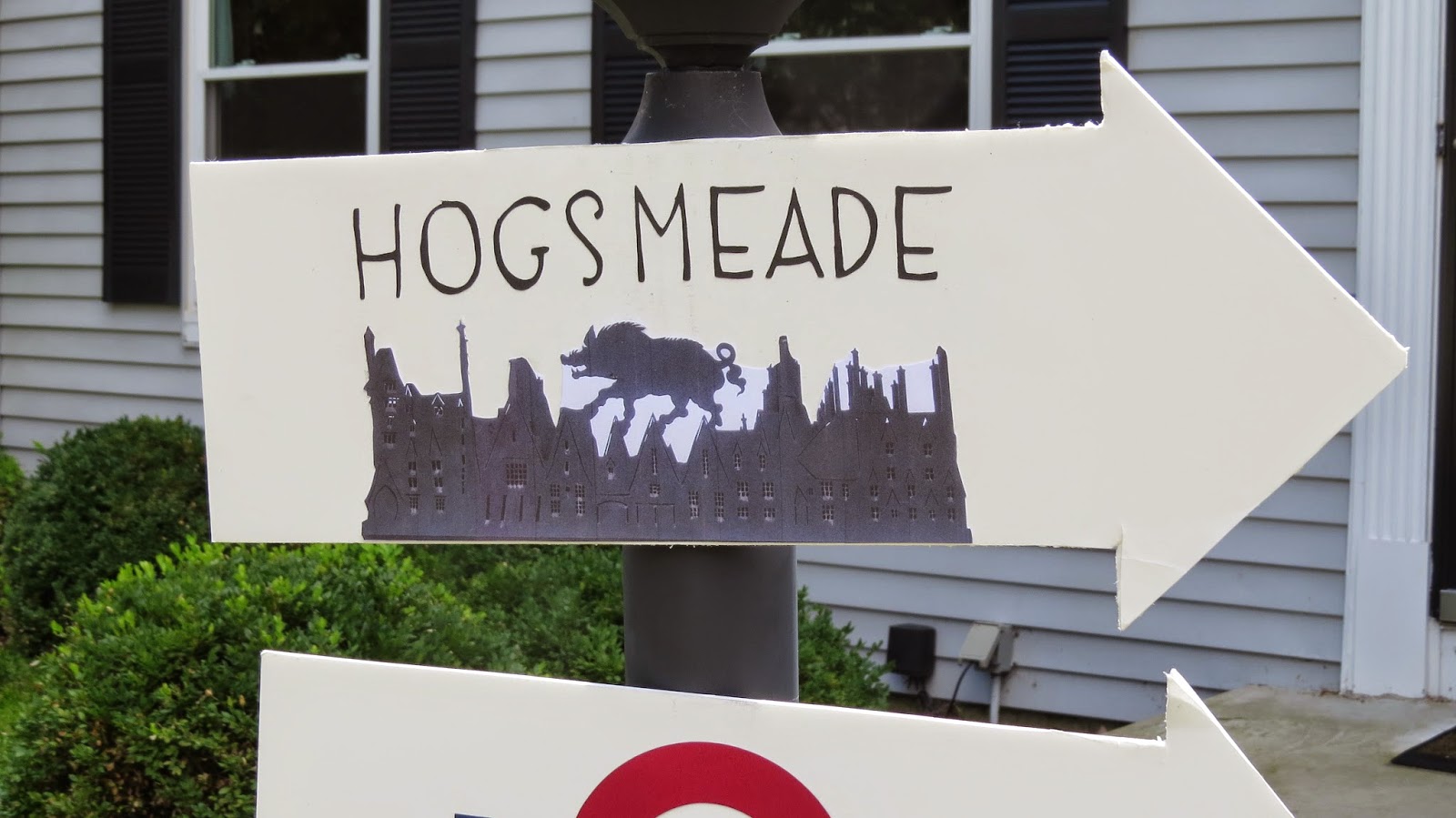 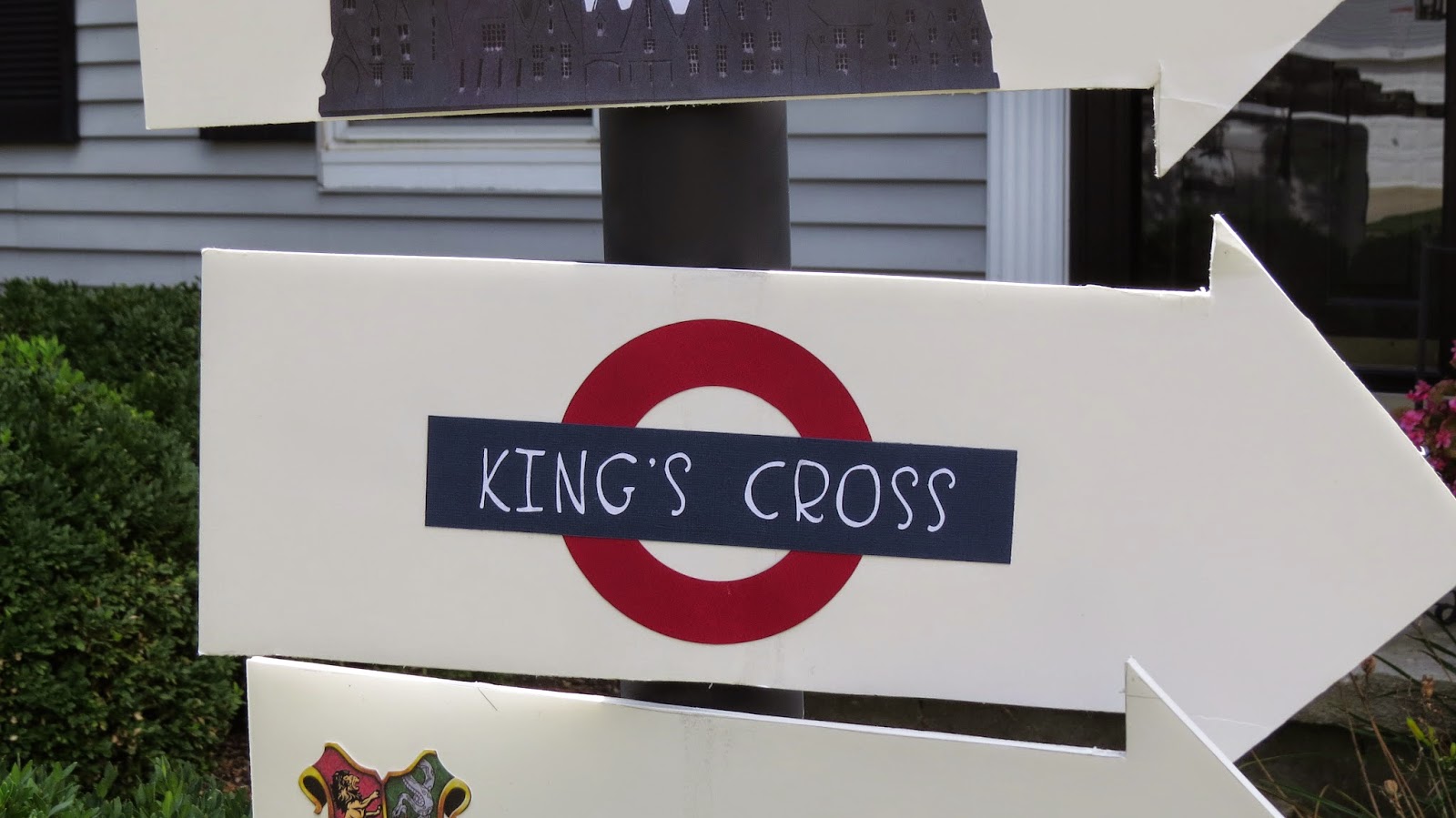 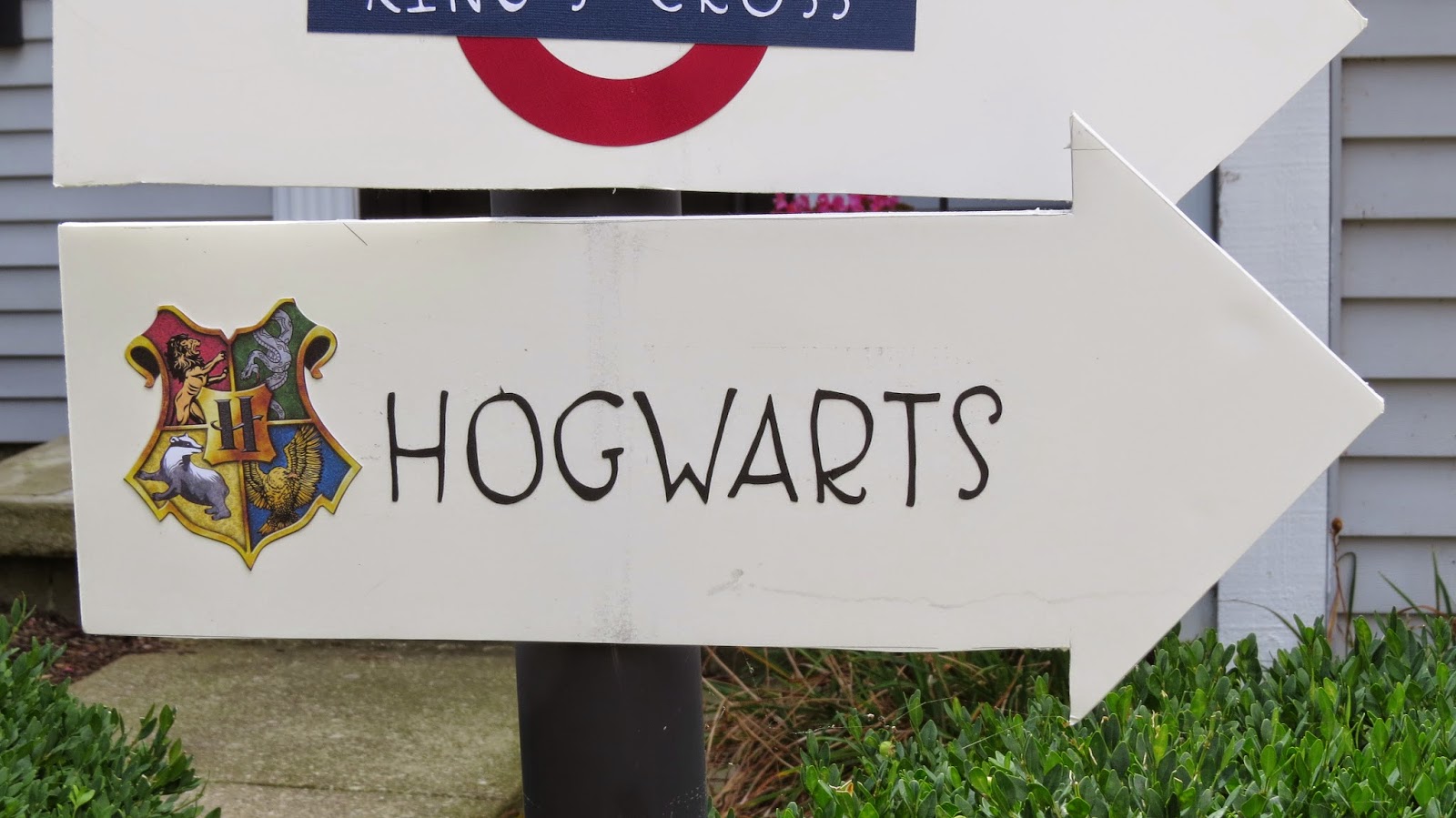 We had originally planned for Diagon Alley to be set up outside in the driveway but the weather prohibited us from doing that so everything was set up inside the garage and the Diagon Alley sign hung up on the garage.

I had seven "shops" in Diagon Alley and we started with Gringotts Wizarding Bank.

I had a very old, small, goldish table that I thought would be perfect to set up our Gringotts.  The idea behind Gringotts was to introduce the kids to Wizarding money.  In the books and movies Harry's first stop in Diagon Alley is Gringotts where he withdrawals some gold in order to purchase his school supplies.  I wanted the kids to have some of their own wizarding money as well as to follow the same path as Harry.

I went to Michael's and purchased small drawstring bags and some iron-on paper.  I found the Gringotts logo online and followed the directions on the iron-on paper in order to put the logo onto the bags.

I also printed out little withdrawal tickets but I ended up just rolling these up and putting them into the bags along with some plastic gold coins that I bought at Party City. 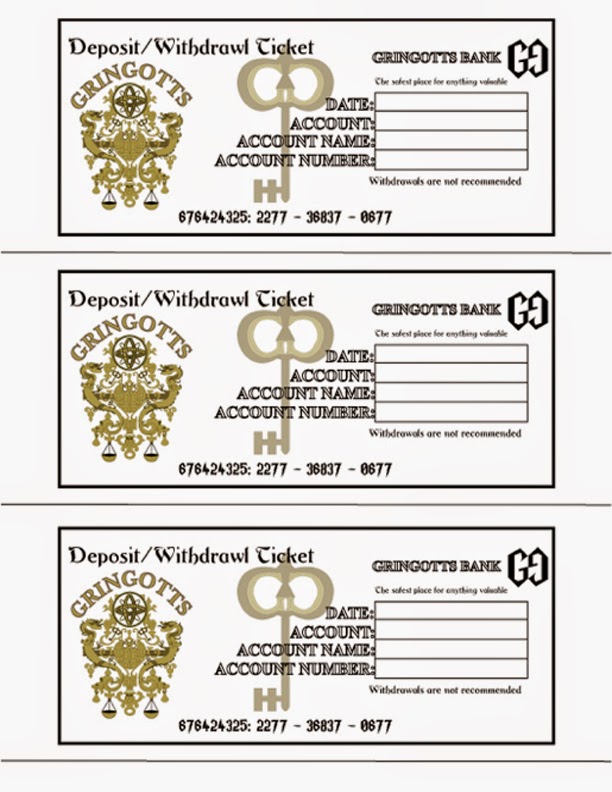 I thought about using chocolate coins but considering that the kids would be receiving a ton of candy at the end of the party I thought they would rather have plastic coins that they could play with at a later time. 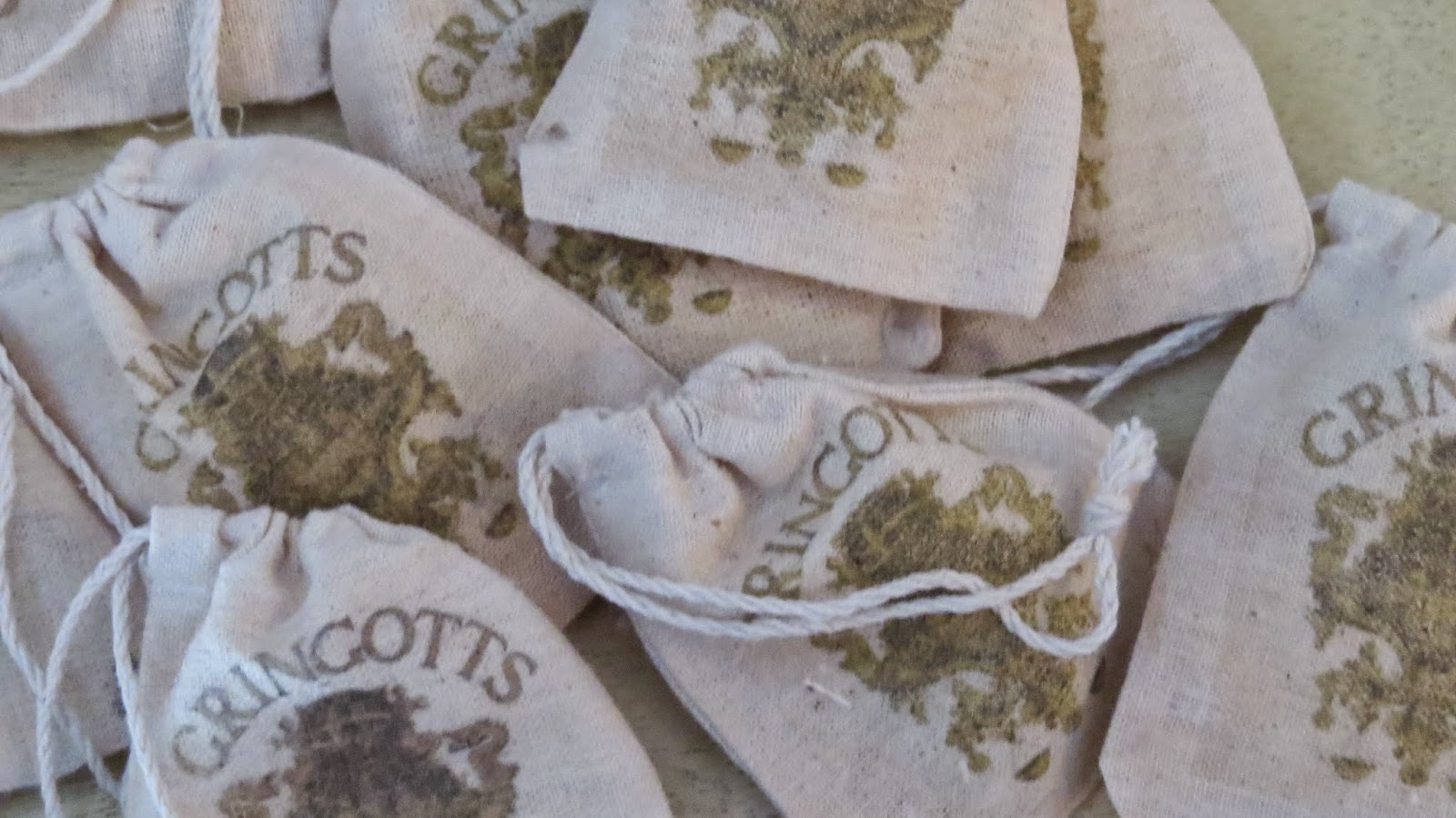 I wanted to have some money scales like the goblins have at their desks in the movies but I was having a hard time find one that didn't cost a fortune.   I knew I was going to have to make one.


I finally found some directions on Pinterest on how to make the scales.  I had to improvise a little but it came out okay.  I went to Michael's and bought a wood candlestick.  Next I went about creating the dishes and arms to the scale. The arms at the top are made from a plastic hanger with the hanging part at the top broken off, and I added some accents with hot glue, and then again spray painted the whole thing. The dishes are created out of gold plastic plates, and gold ribbon that I bought at Michaels (on clearance). I just glued those to the hanger, and placed the hanger on top of the spikey part at the top of the candlestick.   It doesn't actually work but Bug-A-Boo loves it and it is now a decoration in her Harry Potterish bedroom and she uses when she is playing Harry Potter. 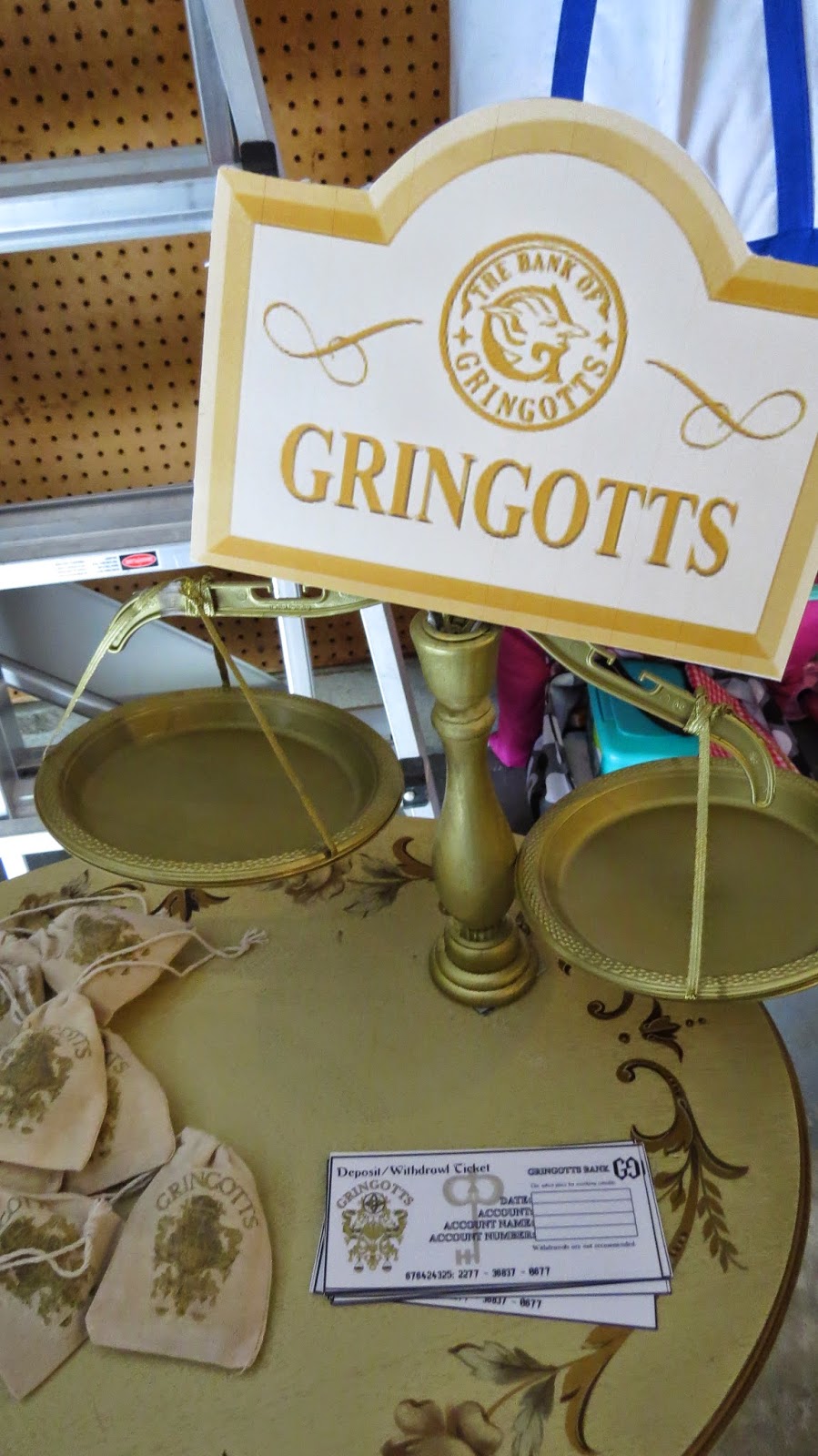 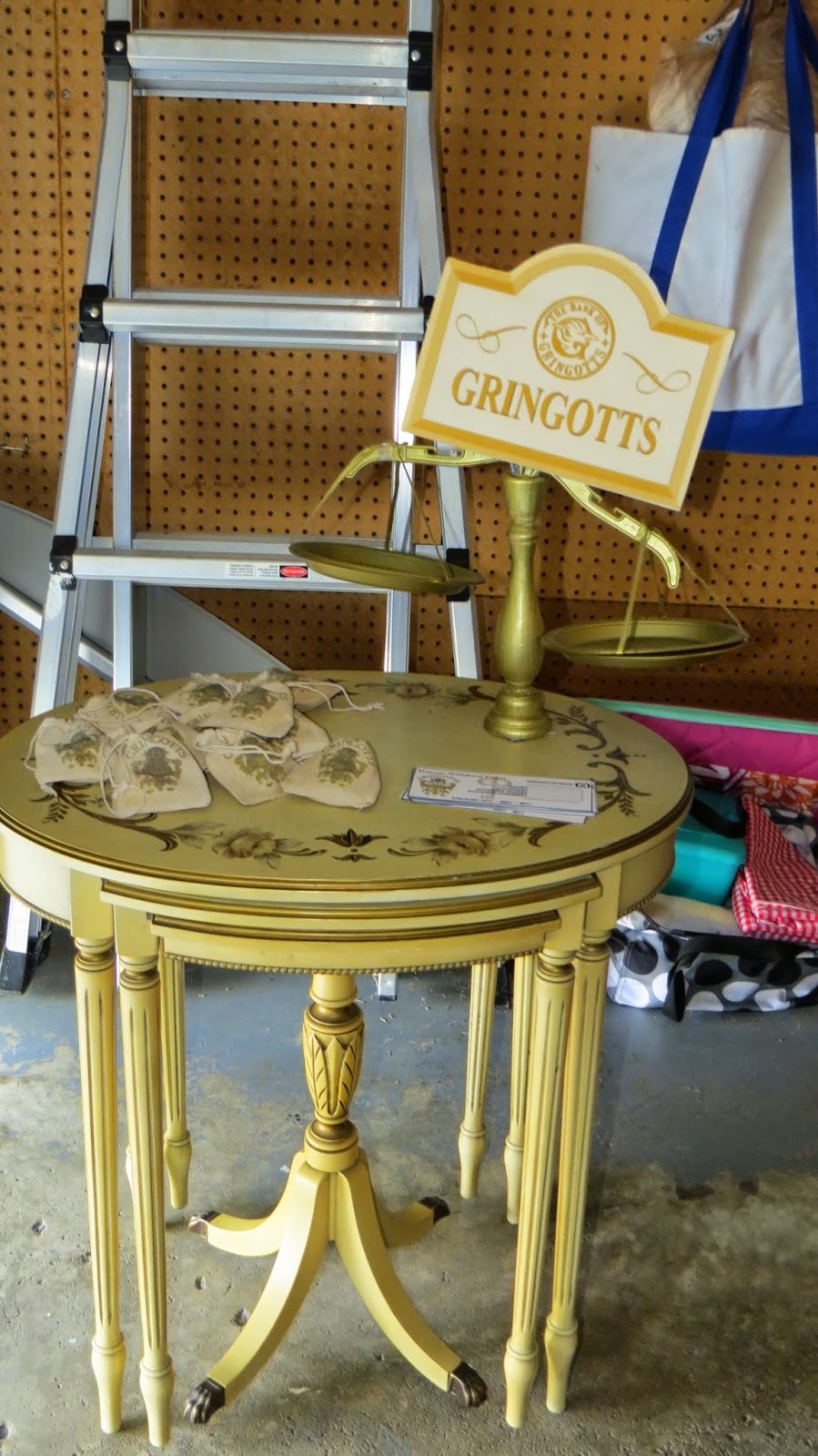 I got the Gringotts sign from PropPrintables, which I printed out and mounted to foam core.


If you would like the digital file for the Gringott's Withdrawal Slip for $2.00 PayPal me at kellyldriver@yahoo.com.

For as long as I can remember I have been a creative soul. I was always drawing or coloring as a child and as a teenager I started scrapbooking. Photos from school events, newspaper clipping, mementos, and other assorted stuff. I was a designer on my high school yearbook staff and an illustrator for the high school newspaper.

When I went to college, my plan was to be a journalist or broadcaster. I took an entry level graphic design course and my major was signed. Technically, I was an Art major with a concentration in Graphic Design and I minored in both Advertising and Broadcast and Cinematic Arts.

As fate would have it I ended up in a career in Broadcasting (which was my first love) however my love of art is always with me.

As an adult my one major creative outlet has been scrapbooking. I love it! It is a way for me to work creatively with my hands and preserve precious memories for my family. I have made so many friends through scrapbooking and have over 20 completed books. It is a never-ending process to scrap our lives, but I’m making headway and hope that I never catch up.

My second love is cooking and I love coming up with creative menus and ways to show my family how much I love them through my food.

Crafty Chick:
That's me!
Prince Charming:
My dear husband, Tom, who I married in 2003 and am still madly in love with.
Bug-A-Boo:
Our beautiful daughter, Sydney, who is the light of our lives.
The Queen Mum:
My lovely mom, Dorothy, who is the greatest mom and grandma and is a constant help to us.
Luna:
Our loony dog.